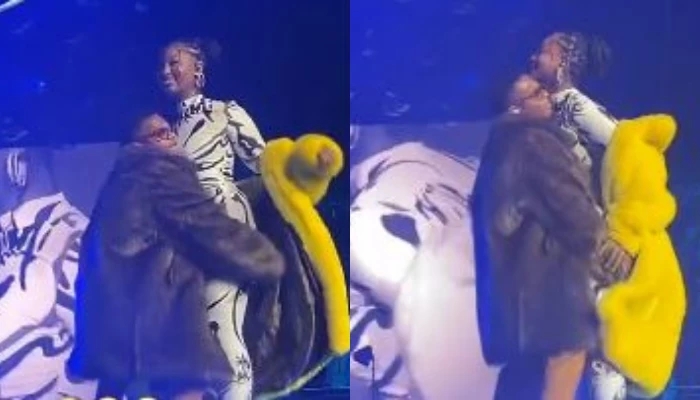 Wizkid seen trying to lift Tems, raising her above the thighs

Singer wizkid’s concert which took place at O2 Arena caused a lot of internet roar as some fans on Twitter accused Wizkid of sexual harassment while some tried to defend him.

A fan, @splitflows, said, “Lifting her in such a manner is even an inappropriate behavior unless it was rehearsed or given impromptu consent. She’s not a can of malt.”

Another fan, @queenosky said, “On close inspection, it does look like Tems was not happy with Wizkid trying to lift her up. Oh dear.”

“he had better publicly apologised to Tems. The move was completely unwarranted and I cannot even understand the rationale behind it. Men really need to understand that they cannot simply go around grabbing butts. No, Balogun, you have no right to do that,” @chiicker said.

In Wizkid’s defence, @josh_savage03 tweeted, “What exactly are you even saying? These are artists that are professional and there’s no way you can describe what Wizkid did as sexual harassment. You’re telling me Wizkid should’ve said, ‘sorry Tems, can I carry you from your ass’ or what?”

Call me crazy, and please correct me if I’m wrong. But isn’t the only person who can say whether or not what Wizkid did was sexual assault Tems herself?” @axleighlouis asked.

Another fan, @rms_firstborn, tweeted, “Wizkid and his FC are embarrassing. Obviously sexual harassment but covering it up with dumb jokes – ‘wizkid like big things, its big Wiz’. If you have nothing sensible to say, just shut up and let the matter die instead of turning touching without consent to cruise.”

“Tems should have flowed with the vibe last night at least. Now haters are claiming it’s sexual harassment from  when it’s a normal thing when two artistes of the opposite sex are performing on stage,” @utdfirstborn tweeted.