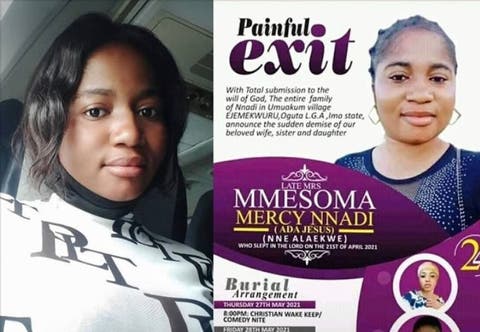 Ada Jesus was from Orlu, Imo, Nigeria. She graduated from Imo State University.

In December 2020, Ada Jesus was diagnosed with kidney disease which left her paralyzed and confined to a wheelchair, causing her body to swell, especially her face and tummy. 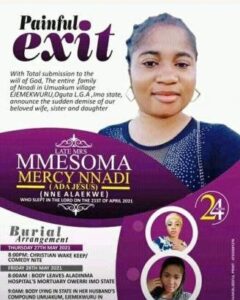 In April 2021, when her health deteriorated further, she went to ask for forgiveness from pastor Odumeje, the founder of Mountain of Holy Ghost Intervention and Deliverance Ministry, actress Rita Edochie and an Asaba-based native doctor, Chi Marine Temple.

Ada Jesus accused pastor Odumeje of conniving with Rita Edochie to stage fake miracles and deceive people in his church. She also claimed she arranged people for fake miracles in the church and helped Rita Edochie get men to sleep with her.

The burial arrangement and fragments of late Ada Jesus were announced on Thursday, May 6, following the death of the 24-year-old comedienne on April 21.

Ada Jesus will be laid to rest in Oguta, Imo state on Friday, May 28 in her husband’s compound.

A Christian Wake Keep and Comedy nite will be held in her honor on Thursday, May 27 before the burial the following day. While the thanksgiving service will be held on May 30.