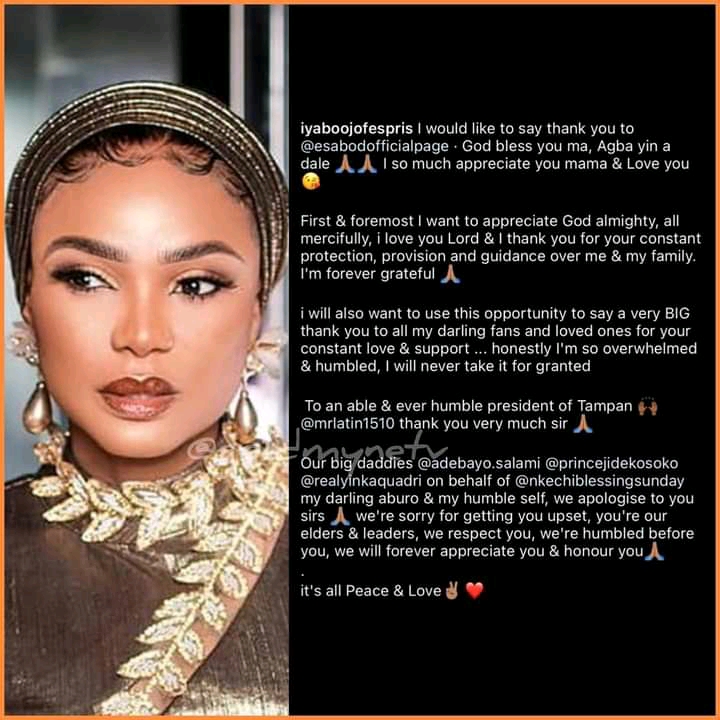 Popular Nollywood actress, Iyabo Ojo, has apologised to the Theatre Arts and Motion Pictures Practitioners Association of Nigeria days after she was issued a serious warning over her irritation on social media on the ongoing trial of the embattled actor, Olanrewaju Omiyinka, fondly known as Baba Ijesha.

The ongoing case had made Iyabo Ojo take to social media on several occasions to air her opinion on the matter.

Apparently, her acts and comments did not sit well with the Board of Trustees of TAMPPAN and the Elders of Nigerian Motion Picture Industry as a stern warning was issued to her and fellow actress, Nkechi Blessing.

The guild accused them of making reckless accusations, abuses and bringing embarrassment to the association and the movie industry as a whole.

Days after, the actress has taken to her verified Instagram page to apologise to TAMPAN.

Sharing a video recording of a live session with the President of TAMPPAN, Mr. Latin, the actress wrote, “I would like to say thank you to @esabodofficialpage. God bless you ma, Agba yin a dale. I so much appreciate you mama & Love you.

Continue Reading
You may also like...
Related Topics:Entertainment, Iyabo Ojo