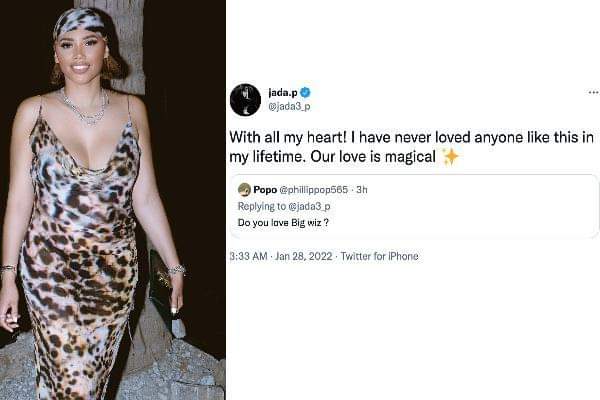 Jada Pollock, manager of the award-winning singer, Wizkid and mother of his third son, Zion has said she has never loved anyone in her life the way she loves the singer, aso Naija reports.

This was in response to a fan’s question on Twitter.

The fan, #phillippop565 had asked Jada if she loved Wizkid?

Wizkid’s babymama Jada responded by saying, “With all my heart! I have never loved anyone like this in my lifetime. Our love is magical.”

Ayodeji Ibrahim Balogun, known professionally as Wizkid, is a Nigerian singer and songwriter.

In September 2014, he released the self-titled second studio album, Ayo.

The album was supported by six singles, including the song “Jaiye Jaiye”. Wizkid left E.M.E after his contract expired. In 2016, Wizkid achieved international recognition following his collaboration with Drake on the hit single “One Dance”, which reached number-one on the US Billboard Hot 100, and topped the charts in 14 additional countries.

In March 2017, he signed a multi-album deal with RCA Records; and released his third studio album Sounds from the Other Side, later that year.

The album was supported by five singles, including “Come Closer” featuring Drake.

Continue Reading
You may also like...
Related Topics:Babymama Jada, Entertainment

Bella Shmurda Appreciates Self For Not Going To University, Says School Not Worth It
Make I Die If I No Take Bullet For My Boss Davido – Isreal DMW (Video)