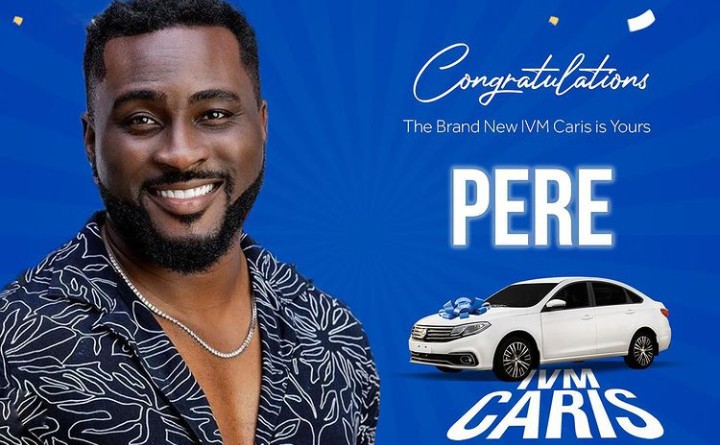 The Big Brother Naija Shine Ya Eye housemates participated in a challenge organised by Innoson Vehicle Manufacturers and Pere emerged as the winner of the task and won himself a car, aso Naija reports.

Innoson task, which took place on Tuesday, day 66 of the show, involved a task where housemates had to pull down a bucket with stones.

When the housemates got into the arena for the task, they met the brand new car decorated with balloons and ribbons.

For the game, six buckets were hung on a beam and the housemates were asked to collect stones with a hook and put them in their individual buckets.

The first housemate whose bucket falls as a result of the weight of the stones would emerge as the winner of the car.

As the game began, Whitemoney wrongly hit his stone on the bucket and it accidentally fell, making him lose out of the game.

However, the rest of the housemates continued filling their buckets and Pere’s bucket was the first to fall due to the weight of the stone.

After the task, Pere was announced as the winner and together with other housemates, they opened the car door and looked inside the car, before Biggie sent them back into the house.

If I Win BBNaija ,I’ll Use The Fattest Cow For Thanksgiving – Whitemoney Says
I See Whitemoney And JMK In A Relationship After BBNaija -Pere Says