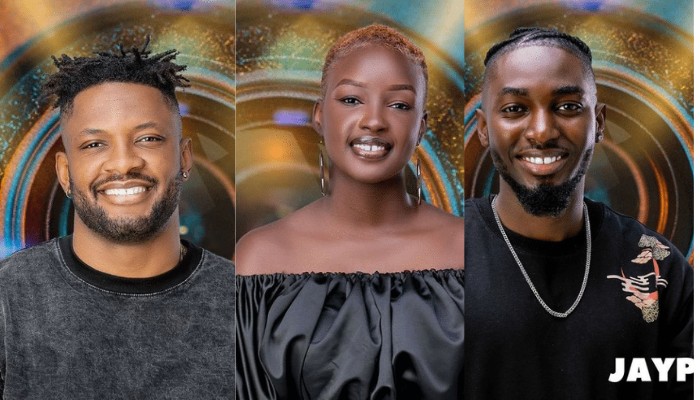 Big Brother Naija Shine Ya Eye housemate, Jaypaul, gifted flowers to his love interest, Saskay, who is also Cross’s love interest and as such, he think she’s using him to catch cruise,aso Naija reports.

This happened on Wednesday night, day 46 of the show, when Big Brother called Jaypaul into the Diary room.

As he came out from the Dairy Room, Jaypaul presented the fresh flowers to Saskay, who was visibly surprised.

The other female housemates cheered Jaypaul for his romantic act and teased Saskay too.

While all this happened, Cross, who was
also attracted to Saskay, was washing the dishes in the kitchen and appeared to be indifferent about what was going on behind him.

Later on, Cross and Angel were discussing about Jaypaul’s actions and she said, “I was happy for them. It was cute. I love things like that.”

This brought an outburst of laughter from Angel as Cross was straight-faced in his reply.

He added, “And I honestly, sincerely believe she’s ‘catching cruise’.”

“With him?” Angel asked.

Cross said, “Not with him. She’s just ‘catching cruise’ with her life.

“There you go. If I gauge the whole situation, where she’s coming from, the situation she was with outside, and the whole thing she’s doing here, she is really ‘catching cruise’,” Cross said.

Continue Reading
You may also like...
Related Topics:Cross, JayPaul, Saskay

BBNaija S6: I Saw What I Needed in Maria, They Are Good Qualities -Whitemoney
BBNaija S6: Jaypaul’s Mum Breaks Down In Tears As she Campaigns For Her Son (VIDEO)