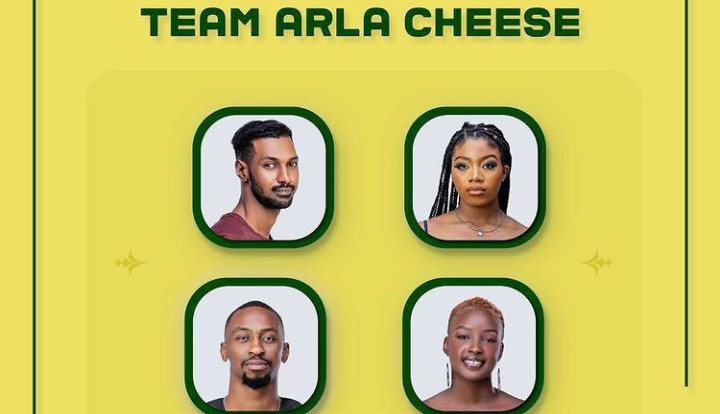 Members of the winning team are Saga, Yousef, Sasky, and Angel, and they all have N1.5m to share amongst themselves, as announced after their performance.

The Arla task which took place on Wednesday, day 53 of the show, involved two activities and the housemates were divided into three teams: Team Arla Cheese, Team Arla Butter, and Team Lupark Butter.

The task began with a riddle game where each team was tasked with giving the correct answers to questions asked.

For the second team task, each group was asked to prepare a full course meal and render a poetry to spice up the food presentation.

This created a buzz among the housemates as they all excitedly carried out their duties in the kitchen, displaying their culinary skills.

After the presentation, the housemates gathered in the arena and presented their meals and drinks, with an accompanying poem.

At the end of the task, Biggie announced that Team Arla Cheese were the winners of the task.

In addition to their prize of N1.5m, the team members also won supplies of Arla range of products.

BBNaija S6: Whitemoney Settles Clash Between Cross And Nini
BBNaija S6: Big Brother House Gets Interesting As Housemates Is To Mimic Each Other For A Whole Day