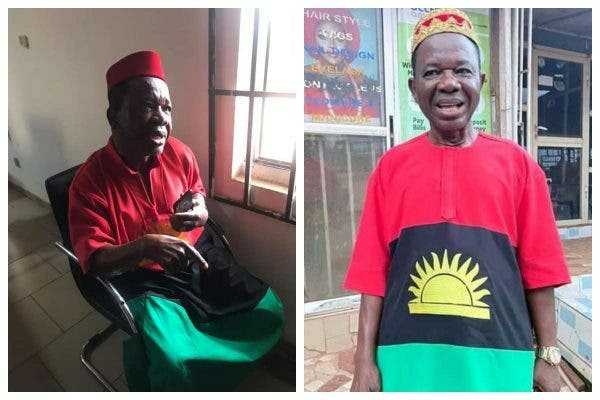 Nollywood actor, Chiwetalu Agu, in an interview narrates his experience in the custody of the military and the Department of State Services in Abuja, aso Naija reports.

Speaking about what happened to him in the past few weeks, he said;

I finished a movie shoot in Asaba and I decided to go back to my base in Enugu. As I was driving through the most popular junction in Onitsha, Upper Iweka, I decided to stop for somebody to alight and at the same time share loaves of bread to some people. So, I bought loaves of bread and was sharing to passers-by – four persons to a medium-sized loaf and one big loaf for eight persons. At a point, I bought up to over N10,000 worth of bread. I heard gunshots from soldiers from Onitsha barracks. When I turned, I saw people running away and the soldiers coming closer. They said, “Enter the bus.” I asked, “What did I do?’’ I discovered that the soldier (talking to me) was the type that does not understand or speak English, so, I said, “I have to be told what I did.’’ And I refused to follow them (soldiers). I sat on the road and then lay down. (I said,) “If you are here to kill me, go ahead.” They were five soldiers and I’m not a sports person. Eventually, they overpowered me, and took me to Onitsha barracks. One senior officer was looking at me with disdain. I was in a tight corner in their office, being an entertainer, an actor; so, I was at their mercy. It didn’t take time before they brought an SUV and drove me to Enugu, 82 Division of the Nigerian Army; you can imagine the distance. It didn’t take them time before they organised a panel and started asking me questions. The costume I wore was designed red, black and yellow with a rising sun. My belief is that having come to this world, whatever level you are, you struggle to climb the ladder, you rise and rise like the sun. I was an ordinary actor in 1981 in NTA (Nigerian Television Authority); I made reference to the fact that I have risen. Did you see me in Biafra, in IPOB costume, in military fatigue or whatever? They asked me questions for between nine and 10 hours.

About his experience in the custody, Chiwetalu said;

There was a man, Yahaya, in the place where I was detained. We were in a dirty room, no bedsheet, only torn mattresses. I don’t know the crime Yahaya committed but he was chained. It was a standard room; I decided to manage it because I didn’t go there to fight. I went there to be listened to, not to heighten the crisis. This government acts too much like a combatant; why should you be a combatant when the person you are dealing with is a civilian and is not armed? The President should jettison his combatant approach and handle issues like a father because if the situation is allowed to linger, the agitation for secession would continue to grow stronger. The Igbo have so much to gift Africa; we don’t have to go abroad to bring many things. We have Dr Innoson (Innocent Chukwuma) making vehicles and many other Igbo inventing great things. Cow business is good but it is not a thing you can use to boast to the international community.

When asked if he was subjected to any form of physical harassment, besides the interrogation he said;

At the 82 Division in Enugu, the interview held in a big office but at the Department of State Services in Abuja, they were taking me from office to office to answer questions. Despite complaining that I suffered from ulcer and can’t eat any kind of food, the things they were bringing for me (to eat) didn’t help my situation. I was released on Tuesday evening when international voices intervened. People like Chief Mike Ozhekome (SAN), who I respect so much; the executives of the Actors Guild of Nigeria intervened – Steven Egbo and Monalisa Chinda came and the DSS handed me over to them and here we are.

Continue Reading
You may also like...
Related Topics:Agu, Army, DSS

Nigerian Singer Simi Gets Praises From Fans On Her New Song ‘Woman’
Temmie  Ovwasa Again, Accuses Olamide Of Killing Her Music Career And Messing With Her Mind