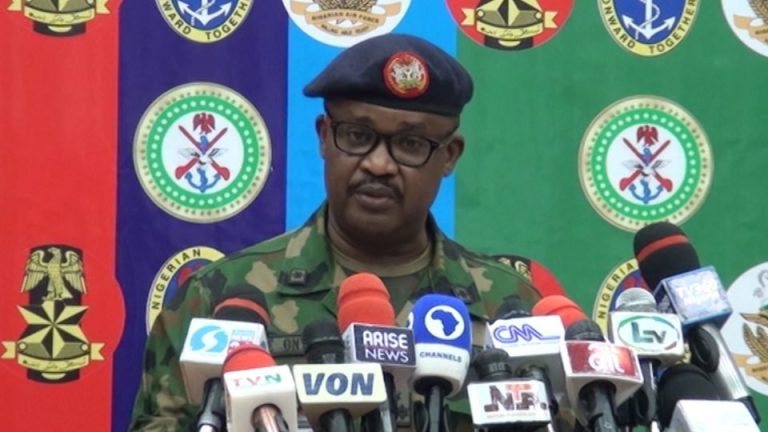 The Acting Director of Media Operations, the Defence Headquarters (DHQ), Bernard Onyeuko has said that the matters of insurgency is currently being taken care of.

He made this known at a press briefing on Thursday in Abuja.

Ninety insurgents have been killed in the North East and 128 bandits have also been neutralised in the North West and North Central within the past two weeks.

He disclosed that troops of Operation Hadin Kai gunned down an unconfirmed number of Boko Haram terrorists in air strikes on November 12 in Baga, near Lake Chad.

Onyeuko further revealed that the troops killed over 50 insurgents and destroyed some of their combat equipment during a repelled attack at Askira-Uba in Borno.

He stated in the course of these operations, 21 terrorists were arrested and 98 assorted weapons, including AK-47 rifles and 2,589 rounds of ammunition were recovered.

The Defence HQ spokesman submitted that within the period, seven kidnapped civilians were rescued and reunited with their families and loved ones.

Onyeuko added 996 insurgents and their families comprising 203 adult males, 302 adult females and 491 children surrendered to the troops at different locations in Borno state.

He stated that the arrested and surrendered terrorists have been profiled and handed over to appropriate authorities for further action.

Speaking on activities under Operation Hadarin Daji in the North West, Onyeuko said a total of 12 criminal elements were arrested within the period.

He revealed that 118 armed bandits were neutralised, five kidnapped civilians were rescued, while 26 assorted arms and 194rounds of 7.62mm ammunition were recovered.

For operation Safe Haven, the Defence HQ spokesman said 38 victims of armed bandits’ attacks and kidnap incidents were rescued and 45 criminal elements arrested, while 3 were neutralised within the period.