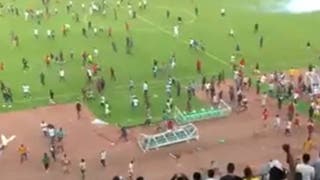 Fifa has stopped the Moshood Abiola National Stadium Abuja which was recently rehabilitated by Dangote Group of Companies from being able to host international matches, aso Naija reports.

This is due to a recent ban by the football governing body FIFA, after the pitch was invaded.

The Super Eagles of Nigeria have moved up two places to 30th in the latest FIFA rankings despite failing to beat Ghana home and away.

The Super Eagles of Nigeria were held to a draw by the Black Stars of Ghana, a result which means they won’t participate in the upcoming World Cup in Qatar.

Fans of the West African nation invaded the pitch after the final whistle, leading to a chaos that saw players and officials have a run for their lives.

FIFA medical officer Dr Joseph Kabungo who had a cardiac arrest on his way to the dressing room was rushed to the hospital but he passed on.

Joseph suffered a cardiac arrest during the commotion and was pronounced dead soon after.

It is not clear what other sanctions FIFA and the regional body CAF could mete out to the Nigeria Football Federation, NFF for failing to provide adequate security for the game but the two bodies frowned at fans’ encroachment into the field of play

Continue Reading
You may also like...
Related Topics:FIFA, Super Eagles