A picture of swordfish has gone heated the media after it was captured by a fisherman on Friday, aso Naija reports. 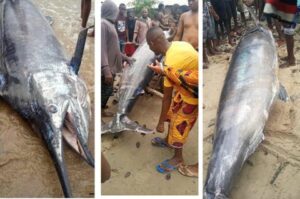 Swordfish are also named broadbills and can live in oceans all over the planet. The fish brought out lots of awareness in the community as a crowd huddled to behold its beauty and magnificence.

Continue Reading
You may also like...
Related Topics:Fishermen, Swordfish