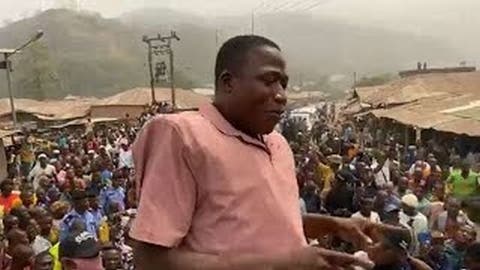 Supporters of Yoruba rights activist, Sunday Adeyemo, better known as Sunday Igboho, have set up a Gofundme page for raising £100,000 (N51.8m) for him to buy buses to implement his project of ridding the South-West of killer herdsmen.

The fundraiser, which was initiated by Maureen Badejo, a blogger and activist based in the United Kingdom, garnered £9, 320 (N4.8m) within 15 hours.

A visit to the Gofundme page showed that numerous persons of Yoruba extraction had made contributions.

Sidikat Tope Olufowobi, who donated £200, wrote, “I donated because I am a Yoruba woman and want harmony in my part of the country

Kunle Makinwa, who donated £50, wrote, “I am an Oodua tokan token (through and through). We will get (sic) by the grace of God Almighty

“I have donated my quota,” wrote Tolulope Akinmuyisitan, after donating £50.

Igboho had administered a seven-day ultimatum to herders in the Ibarapa area of Oyo state, blaming them for abducting, killings, destruction of farmland, and insecurity in the state.

After encountering the herders in Ibarapa with some youths in the area at the expiration of the ultimatum, he moved to Ogun state on Monday and was received by thousands of youths, aso Naija gathered.

According to him, the fight to extricate the Yoruba and bring endless consensus is not for the police but for all Yoruba people, irrespective of where they are all over the world.

The Northern Elders Forum had called on the President, Major General Muhammadu Buhari (retd.), to end what it characterized as the targeted invasions against Fulani.