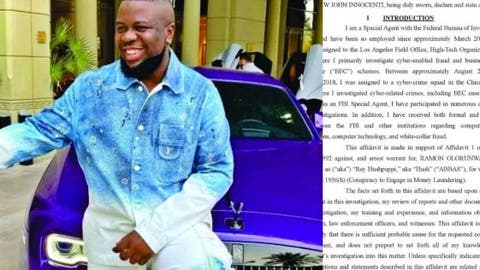 Internet fraudster Ramon ‘Hushpuppi’ Abbas has been charged with fresh fraud accusations by United States prosecutors, accusing him of committing fraud and laundering over $400,000 while in prison, aso Naija reports

On Wednesday, US prosecutors presented documents before the U.S. District Court of California with fresh evidence indicating Mr Abbas committed fraud and money laundering at the U.S Federal correctional facility.

The documents said Mr Abass was involved in the purchase and laundering of Economic Impact Payment debit cards obtained from stolen data of U.S. citizens and residents.

According to prosecutors, inmates are allowed access to phone calls, video calls, the internet, exempt from being monitored to protect their rights to privacy. However, between January 28 and March 4, security officers at the correctional facility observed that Mr Abbas had gone beyond allowed internet use.

It was found that Mr Hushpuppi Abbas had purchased 58 EIP debit cards from an underground cybercriminal marketplace StimulusCard, worth $429,800

The Economic Impact Payments are financial support offered by the U.S. government to U.S residents according to the CARES Act.

Mr Abass, whose sentencing was postponed to July, pleaded guilty to multimillion-dollar fraud charges as part of a plea bargain he entered with the U.S. authorities.

The 37-year-old had been arrested in Dubai in June 2020 and extradited to the U.S. where he has been facing charges of corruption in Central California.

The statement partly read, “RAMON OLORUNWA ABBAS is a Nigerian national previously living in the United Arab Emirates (the “U.A.E.”) but currently incarcerated in the US Federal correctional facility, Central District of California, on charges of money laundering. The FBI’s investigation has revealed that ABBAS, while in a US Federal correctional facility, participated in the purchase of Economic Impact Payment debit cards fraudulently obtained from compromised data of US citizens.

“This affidavit presents new information involving ABBAS which supports Affidavit 1 of Case No 2:20-mj-02992. Recorded internet activities (reviewed pursuant to a federal search warrant issued in this District) of ABBAS in the US Federal correctional facility, Central District of California, reflect that ABBAS purchased Economic Impact Payments debit cards and laundered the proceeds totaling over $400,000.

Continue Reading
You may also like...
Related Topics:Hushpuppi, Internet Fraud

Man Rapes 6-Year-old Daughter, Blames Wife For Not Sleeping With Him
Reports of Hushpuppi $400,000 Fraud In Prison Fake – Cybercrime Expert