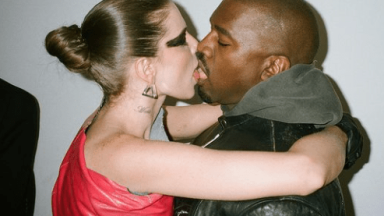 Kanye West And Julia Fox french kiss Each Other In Paris

This transpired During a party attended by notable names such as designer Rick Owens .
A celebrity photographer David LaChappelle, photographer Danielle Levitt caught the two stars and their touches wagging with each over as a token of the love they have for themselves.

He is regarded as one of the most influential musicians of all time.

Born in Atlanta and raised in Chicago, he gained recognition as a producer for Roc-A-Fella Records in the early 2000s, producing singles for several artists and developing the “chipmunk soul” sampling style.

Intent on pursuing a solo career as a rapper, he released his debut studio album, The College Dropout (2004), to critical and commercial success, and founded the record label GOOD Music.

Julia Fox is an American actress, artist, model, and filmmaker.

As an actress, she is known for her debut performance in the 2019 film Uncut Gems, for which she was nominated for the Breakthrough Actor Award at the 2019 Gotham Awards. Vogue has called her a modern bombshell.