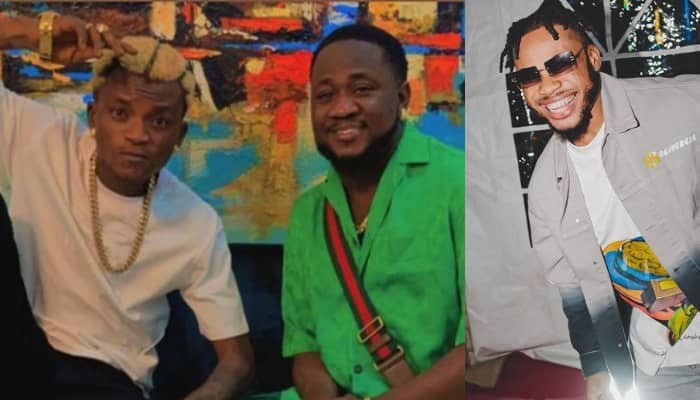 Portable called out dancer Poco Lee for stealing from him and receiving credit for their hit track, Zazoo Zeh.

Portable had shared a video where he stated that Poco Lee was trying to steal from him, Aso Naija reports.

The street sensation is currently making big vibes with his ‘Zazoo Zeh’ hit in which he featured award-winning singer, Olamide, and Pocolee.

Two nights ago, Portable had performed with Wizkid, Olamide, and Poco Lee. While Portable danced, Wizkid ‘sprayed’ him some dollars while Pocolee picked up the money.

In the video, Portable claimed that Wizkid sprayed him up to $3,000 but Poco Lee gavey him only $600. He also berated the dancer for putting his name first in the arrangement of the song.

In the now-viral video, Portable said in pidgin, “Poco Lee, you no show love oh, na rip you wan rip me oh. You carry my song. Shey na you get Zazoo ni?”

Reacting to Portable’s outburst, Kogbagidi shared a video on his Instagram page, where he was questioning Portable for calling out Poco Lee.

He captioned the picture, “Unruly and unprofessional conduct is always expected from upcomings . You never can tell what goes on in their mind or head. I’m shocked and embarrassed at this point. Do I need to fix your career and your head at the same time?”(sic)

Poco Lee, however, has not commented on the ongoing drama as he simply shared some pictures on his page with the caption, ‘Hmmm’.

Continue Reading
You may also like...
Related Topics:#Zazuu Zeh, Kogbagidi

Young Man Caughts Wizkid’s Sweater During Show, Puts It Up For Sale For N620k
Bridesmaid Banned From Wedding For Looking Better Than Bride