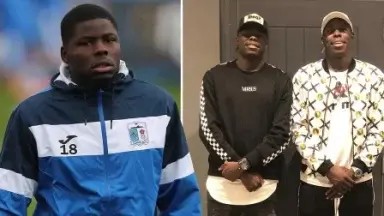 He was banned from the club for filming the cat-attack video .

The video apparently, has has gotten them into trouble.

Kurt has already been fined £250,000 by West Ham while his two pet cats have been seized by the RSPCA after the video of him slapping a cat was released on Snapchat.

Kurt has also lost out on his personal sponsorship with Adidas, who terminated its deal with the French defender on Wednesday.

Yoan, meanwhile, joined National League side Dagenham & Redbridge in December and has made six appearances for the club.

However, they have now confirmed that Yoan, 23, will no longer represent them while the RSPCA’s investigation is ongoing.

A statement from Dagenham & Redbridge on Thursday read: ‘The club would like to give a further update on its player, Yoan Zouma.

‘Yoan was this week contacted by the RSPCA to assist in their investigation and is fully cooperating with them.

‘However, Dagenham & Redbridge FC would again like to reiterate that it condemns any form of cruelty towards animals and fully understands the reaction of many of its supporters.

‘The club has therefore decided that until the RSPCA has completed its investigations, Yoan will not play for Dagenham & Redbridge in any competitive match.

‘Any further action deemed necessary to be taken will be made at the conclusion of the RSPCA investigation.’