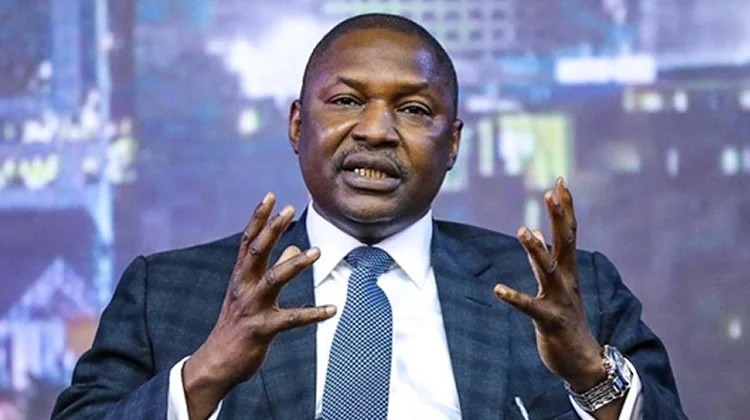 The Attorney-General of the Federation and Minister of Justice, Abubakar Malami, SAN

The Attorney-General of the Federation and Minister of Justice, Abubakar Malami, SAN, has approved a request by the National Drug Law Enforcement Agency for the seizure of DCP Abba Kyari and his co-conspirators assets, aso Naija reports.

It was gathered that the NDLEA’s request, which was dispatched to the justice ministry penultimate week, had received the AGF’s approval.

Kyari, who is wanted in the United States for alleged involvement in a $1.1m scam carried out by a notorious Internet scammer, Ramon Abass, aka Hushpuppi, was suspended by the police last July.

With this development, the former Commander, Inspector-General of Police Intelligence Response Team and his accomplices may lose their assets, cash and money in bank accounts; vehicles; real estate, notably hotels, residential and commercial buildings; personal effects such as wristwatches, jewellery and other valuable possessions.

Aso Naija had reported last week that about N4.2bn was traced to Kyari and his co-accused, ACP Sunday Ubua’s bank accounts.

The NDLEA had on March 7 arraigned Kyari, Ubua and four members of the IRT, Sunday Ubia, Bawa James, Simon Agirigba and John Nuhu, on eight counts of conspiracy, obstruction and dealing in cocaine, and other related offences before the Federal High Court, Abuja.

Two other suspects arrested at the Akanu Ibiam International Airport in Enugu, Chibunna Patrick Umeibe and Emeka Alphonsus Ezenwanne, were also listed as defendants in the suit marked FHC/ABJ/57/2022.

A senior justice ministry official said, “The AGF malami has endorsed the request by the NDLEA seeking approval for the confiscation of the assets of Abba Kyari, Ubua and the other police officers involved in drug dealing.

“With the approval of Malami, the drug agency can now go after their property such as real estate, bank accounts, cash, vehicles, stocks, bonds and anything of monetary value.”

The source further said the seizure of the embattled DCP and his co-accused assets was to ensure that they did not benefit from the proceeds of crime.

The NDLEA spokesman, Femi Babafemi, had confirmed that the accused persons’ bank accounts would be frozen, noting that this was standard practice.

Continue Reading
You may also like...
Related Topics:Abba Kyari, Abubakar Malami, EFCC, SAN, The Attorney-General of the Federation and Minister of Justice