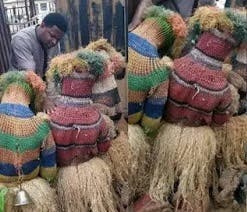 Masquerades give their lives to christ

Masquerades kneel before the pastor to pray for them

It is not a new thing that religious discrimination should be shunned among believers whether a Muslim, Christian or a gentile. A viral photo of 3 masqueraders has surfaced online and as such caused and snugged a lot of reactions. While some are at it, others believed that there is a place for everyone and that might be referenced back to the return of Jesus Christ, aso Naija reports.

A viral photo of 3 masquerades danced before a pastor to pray them, has generated mixed responses among social media users.

Masquerades squat before the pastor to pray for them
It is not clear if the masquerades asked to be prayed for or the pastor saw them and accosted them and preached to them. But in the photos, the masquerades could be seen in a sober mood as the man assumed to be a cleric laid hands on them during prayer

Nigerians have however come up with their various thoughts on the rather bizarre photo as it is contemplated an extraordinary occasion to see masqueraders surrendering to pastors.

Continue Reading
You may also like...
Related Topics:Entertainment, Masquerade, Pastor