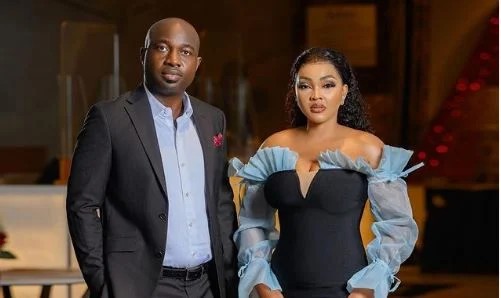 Popular actress, Mercy Aigbe, has spoken down on accusations that States that she crashed the marriage of her new husband, Kazeem Adeoti, aka Adekaz’s marriage to his first wife, Funsho, aso Naija reports.

A photo shared by her former husband, Lanre Gentry, which went viral on the Internet showed the both of them with Adekaz and Funsho at a party.

However, in a terse message sent to Saturday Beats, Mercy Aigbe stated that Gentry and Adeoti were never friends and it wasn’t her fault.

She said, “They were never family friends as speculated by Funsho and what is been peddled on social media. The picture (in question) was taken in 2013 during Adekaz’s fortieth birthday, and I was still married to Gentry then. I attended the event with my then husband. My husband is a Muslim and he is allowed to have more than one wife. I did not break his marriage to Funsho.”

Meanwhile, Angela Tolulade, a United States of America-based woman, who claimed to be a family friend to the Adeotis told Saturday Beats that Adekaz and Juwon were not on good terms before Aigbe came into the picture. She said, “Adekaz and Funsho got married 20 years ago in the US. A licensed mortgage broker, Adekaz relocated to Nigeria to start a movie production business.

“He came to Nigeria with Funsho, who later went back to the US, saying she did not want to stay in Nigeria. The marriage was on until Funsho refused to come over and her husband kept pushing for her to be around. It is important to note that this matter had dragged on for almost two years. He (Adekaz) told her (Funsho) point blank that he would marry another wife if she did not return as agreed.”

Tolulade also insisted that Adekaz never shirked his responsibility to their three children. She said, “Till date, Adekaz still carries out his duties as a father. He pays the school fees of the children and foots their other bills. Funsho cannot say he neglected her because she was the one adamant about not returning to Nigeria.”

Speaking further, the family friend stated that despite pressure from her husband, Funsho refused to relocate to Nigeria. She added, “It is on record that Funsho bluntly told Adekaz that she would not return to Nigeria because she can’t live in Nigeria anymore. She told him that if he chooses to marry another wife in Nigeria, he can go ahead but once he does that, it would be over between them.

“She gave her husband an ultimatum to choose between coming back to the US or staying back in Nigeria, marry another wife and everyone would go their separate ways. Funsho cannot deny not knowing that her husband was taking another wife as she was fully informed.

“If Funsho wanted her marriage to work, she would have returned many years ago. But she stayed put in Minnesota. Their first child is in a private university in the US, and Adekaz pays her fees. Their other kids are also not abandoned. Meanwhile, Adekaz is a Muslim and he has the right to marry more than one wife.”