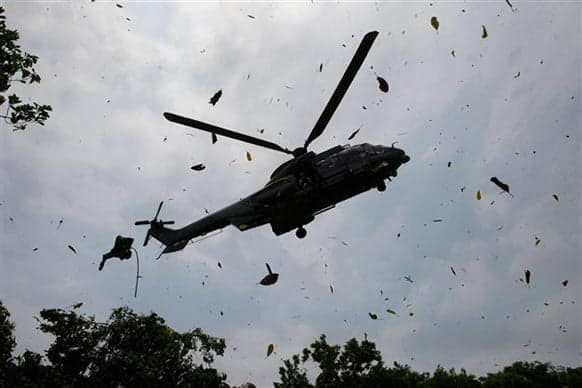 It was gathered that jets of the Multi-National Joint Task Force (MNJTF) bombarded the Kusulu and Toumboun Adashe camps located in the South West of Lake Chad.

Military sources revealed that the camps were destroyed the the MNJTF air troops killing dozens of Boko Haram terrorists, with many sustaining injury.

The MNJTF aerial raid was aided by the collaboration of French forces.

The counter-insurgency operation at the terrorists’ camps took place on Wednesday.

It was, however, unclear as to whether Buduma, the self-styled Boko Haram ‘Ultimate Commander’, was affected by the military attack.

Buduma, the leader of the ‘unrepentant’ Boko Haram, operates at a border area between Nigeria and the Niger Republic.

It was gathered that some of Buduma’s fighters were deployed to North-west and dominate a forest close to Rigachikun in Kaduna State.

A source told PRNigeria that the terrorists now rustle cattle and kidnap people to their den at a forest close to Rigachikun in Kaduna State.

The monarch also backed the process of reintegrating the repentant insurgents back into society, adding that they have realised their mistakes.

Recall that the Nigerian Army had disclosed that over 8000 insurgents have surrendered their arms and ammunition, adding that the repentant terrorists would be reintegrated back into the society.

Speaking at an event in Maiduguri on Thursday, the traditional ruler stated that the reintegration move is a welcome development as long as it could bring lasting peace.

He said the insurgency in the state had lingered for a long time and that the people were ready to accept any reconciliation and peace-building effort.

Continue Reading
You may also like...
Related Topics:Kaduna, Terrorist

How My ‘Yahoo’ Son Tried To Remove My Eyes For Money Ritual – Delta Woman Narrates
NYSC To Youth Corpers : ” Have Someone On Hand To Pay Off Ransom Demanded In Case You’re Kidnapped “