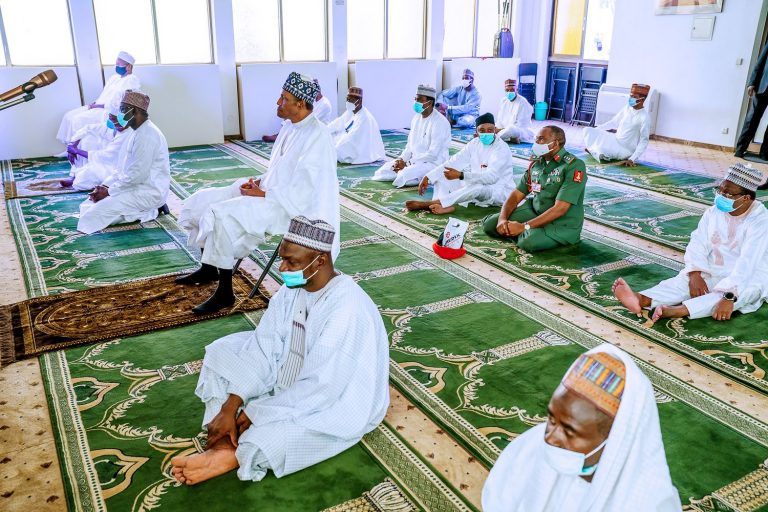 According to a statement made by his spokesperson, Garba Shehu, the President arrived at the Holy City on Wednesday evening to observe the Islamic pilgrimage.

The statement added that President Buhari will return to the country after performing the lesser Hajj in Makkah.

Aso Naija reports that the Umrah can be undertaken at any time of the year, in contrast to the Ḥajj which has specific dates according to the Islamic lunar calendar.

Earlier, the Nigerian leader took time off to offer prayers on behalf of the country during a brief stopover in Madinah, Saudi Arabia.

According to the presidential spokesman, President Buhari along with his entourage prayed for the return of peace in Nigeria.

He also prayed that the insecurity raving the country and many other parts of the world will be overcome soonest and become a thing of the past.

Buhari spent quality time at the Mosque of the Holy Prophet Muhammed, engaging in prayers and recitation of the Holy Qur’an.

This online news platform had reported that the President of Nigeria, Muhammadu Buhari, on Wednesday met with the Chairman of Dangote Group, Aliko Dangote at an investment summit in Saudi Arabia.

Adesina in the statement further stated that his principal also met with the founder of BUA group, Abdul Rabiu and Group Chief Executive of Oando Plc, Wale Tinubu.

Continue Reading
You may also like...
Related Topics:Buhari, Hajj, Mecca