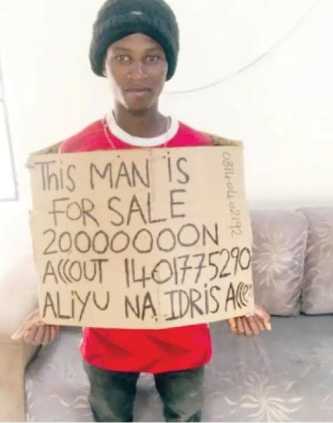 Nigerian Man Puts Himself Up For Sale For N20m, Rejects Man That Offered To Pay N10m

Nigerian man from Kaduna state has put himself up for sale, aso Naija gathered.

The Nigerian man identified as Aliyu Na Idris who is a tailor by profession said his decision to put himself up for sale was because of the hardship in the country.

Idris has been on the street for five days carrying a placard that says “This man is for sale for N20 million.”

The young man said he started his journey from Kaduna but moved back to Kano when he could not find a buyer. He said people offered him N300,000, N5m, and N10m but he refused.

He also noted that his tailoring business crashed due to a financial crisis and he began to lose his customers.

He stated that he opted to sell himself due to his ongoing problems.

When he was asked what he plans to use the money for, he said that he will be spending it on his parents, the state he was bought, on those who helped him advertise, and also for his upkeep.

He said: “I will give my parents N10m; I will give N5m as tax to the state where I was bought, the person who helped in advertising me will be rewarded with N2m while the remaining N3m will be kept for me under the care of the person who buys me for my daily upkeep.”