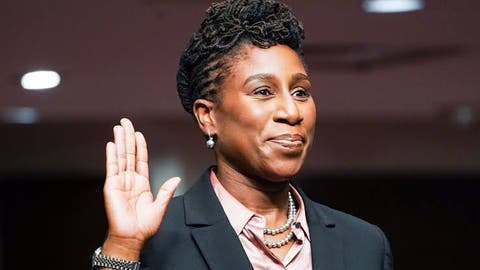 Nigerian Woman Candace Jackson-Akiwumi Set To Be US Supreme Judge

Candace Jackson-Akiwumi married to Eric Akiwumi, who is a Nigerian, has become one of the most likely potential nominees for the Supreme Court appointment under President Joe Biden administration, aso Naija reports.

The exit of Breyer, who is 83, gives Biden a likely smooth opportunity to name a replacement to the lifelong seat on the Supreme Court while his Democratic Party retains control of the Senate.

United State of America’s president Joe Biden had also promised to put an African-American woman on the court back when he was campaigning for the Democratic presidential nomination.

Among the leading candidates to replace Breyer are Ketanji Brown Jackson, a United State of America Court of Appeals judge, and Leondra Kruger of the California Supreme Court.

Of the 115 justices who served on the Supreme Court, only five happens to be women, including three today — Sonia Sotomayor, Elena Kagan and Amy Coney Barrett.

The Only two have been Black men, one of whom is current Justice Clarence Thomas and the other respectively.

Continue Reading
You may also like...
Related Topics:Candace Jackson-Akiwumi, US Supreme Court

SERAP Charges Buhari To Court, Over Missing N3.1bn In Finance Ministry
Cleric Oba Solomon Reacts To Police Invitation After Prophesying That Tinubu Will Die If He Becomes President