The management of the National Youth Service Corps has denied an express advice in the handbook issued to youth corps members, aso Naija gathered.

The handbook is titled, Security Awareness and Education Handbook For Corps Members and Staff.

The handbook, on page 56, had advised corps members travelling on “high-risk” roads to alert their “family members, friends and colleagues to have someone on hand to pay off the ransom that could be demanded” in case they are kidnapped.

The NYSC denies giving the advice, even when each corps member has the handbook, which has also been obtained from a youth corps member currently undergoing the mandatory one-year national youth service in the Batch B Stream 1 cohort. 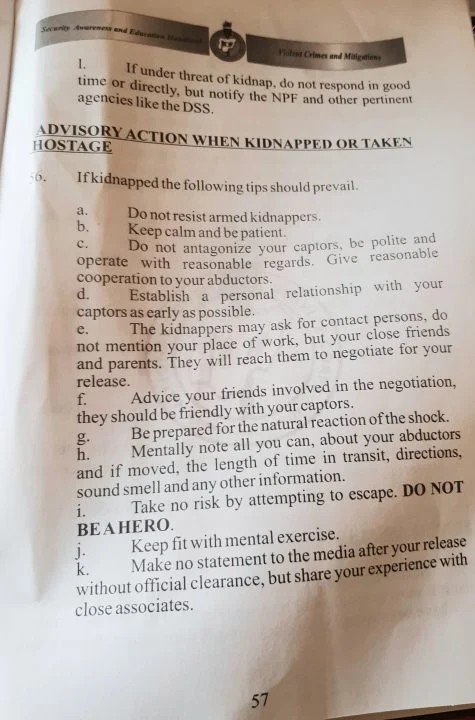 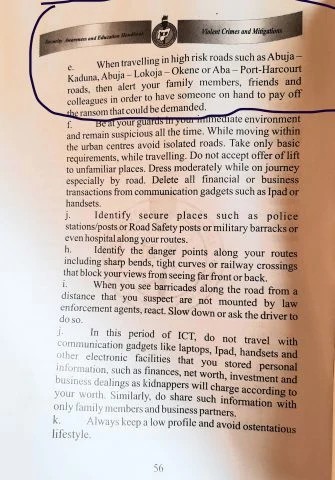 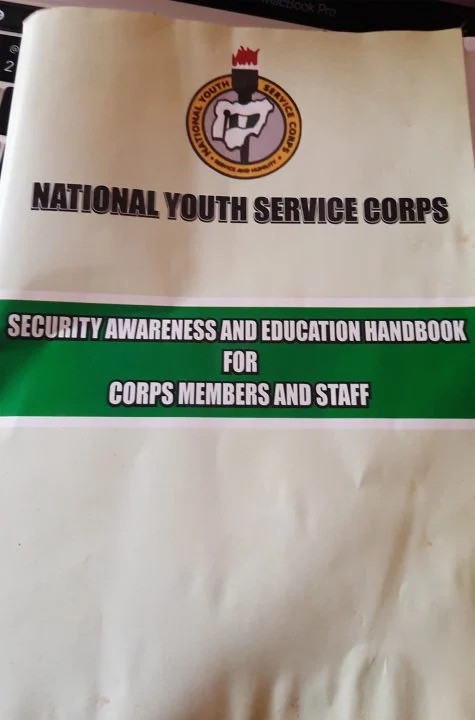 The NYSC emphatically states that the clause quoted is not embedded in NYSC Security Tips pamphlet, which was allegedly put together by “a highly respected retired security expert.”

Also, page 57 of the handbook tutored corps members on how to conduct themselves when kidnapped.

The section titled, ‘Advisory Action When Kidnapped Or Taken Hostage’ partly reads, “Do not antagonise your captors, be polite and operate with reasonable regards. Give reasonable cooperation to your abductors.

“Establish personal relationship with your abductors as soon as possible.

“The kidnappers may ask for contact persons, do not mention your place of work, but your close friends and parents. They will reach them to negotiate for your release.

“Advise your friends involved in the negotiations, they should be friendly with the captors.

“Take no risk by attempting to escape. DO NOT BE A HERO.

“Make no statement to the media after your release without official clearance but share your experience with close associates.”

However, in a statement, the NYSC management refuted the content of the handbook despite the fact that the authorities issued the handbook to every corps member during their orientation exercise across the country.

Continue Reading
You may also like...
Related Topics:Abduction, NYSC