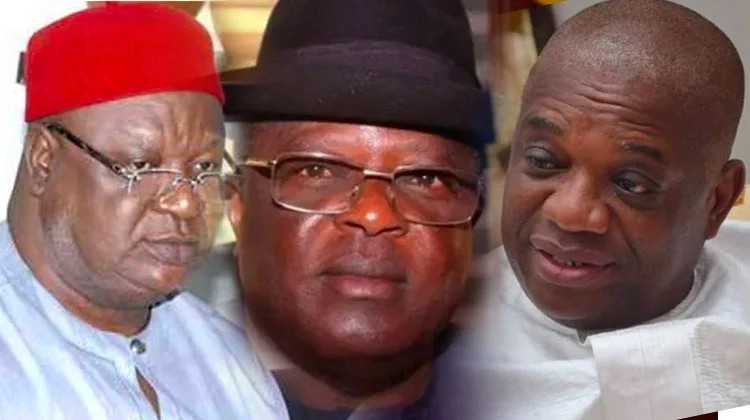 2023 Presidency: Igbo Aspirants Vow Not To Step Down

Some of the aspirants from the South-East region have vowed not to step down for one another, aso Naija reports.

This is as the apex Igbo socio-cultural organisation, Ohanaeze Ndigbo, warned that any presidential aspirant from the South-East who refused to step down and support a common candidate from the region would fail.

Some of the contenders for the presidency from the South-East are Anyim Pius Anyim and Dave Umahi (Ebonyi State), Peter Obi and Kingsley Muoghalu (Anambra State), Orji Uzor Kalu and Sam Ohuabunwa (Abia State), Rochas Okorocha (Imo State), Chris Baywood of Baywood Foundation (Enugu) and others expected to make their intention known in the coming days.

While Kalu, Umahi and Okorocha are members of the ruling All Progressives Congress, the likes of Anyim, Ohuabunwa and Obi are in the main opposition party, the Peoples Democratic Party.

It is not clear on which platform Muoghalu and Baywood will contest.

Recall that the South-East has since Nigeria returned to democracy in 1999 been clamouring for a president of Igbo extraction.

But one of the aspirants, Mazi Sam Ohuabunwa, described his presidential ambition as motivational and therefore had no plans to quit no matter the situation.

Ohuabunwa told revealed that he could only accept to withdraw from the race if “the powers that motivated him decide otherwise.”

He was responding to a question on whether he would be willing to step down if asked to do so in order to reduce the number of aspirants and brighten the chances of the South-East having a shot at the presidency.

“I am not willing and not considering stepping down. I am not desperate, and that aspiration cannot be quenched,” he further said.

Ohuabunwa specifically said his presidential aspiration did not start in one day but inspirational, adding, “it is not something to jettison like that.”

The PDP presidential hopeful, whose mantra is, ‘The change that Nigeria needs’, said, “the country needs the best to assuage the decadence in society.”

Ohanaeze vows to present one aspirant in major parties

Earlier, the apex Igbo socio-cultural organisation, Ohanaeze Ndigbo, said it had set up a committee to discuss with all presidential aspirants from the region to ensure it presents one person to contest in all the major political parties.

Continue Reading
You may also like...
Related Topics:2023 Presidential Election