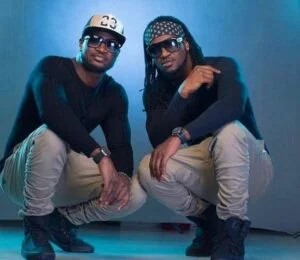 The Nigerian music duo, Psquare, literally went on their knees to apologise to their fans all over the world over their fight and breakup, aso Naija reports.

The music duo pleaded with their fans at the Psquare Reactivated concert at the Eko Convention Centre, on Christmas Day.

This was their first musical concert after their reunion. During their performance, they said, “We apologise for breaking up, deep apologies to our fans all over the world.

“I want everyone around the world to know that we are asking for forgiveness,” Psquare said.

Aso Naija had earlier reported the musical duo’s split over irreconcilable differences in the family, in 2017.

However, they got back together weeks ago to celebrate their 40th birthday together

P-Square is a Nigerian music duo consisting of the twin brothers, Peter Okoye and Paul Okoye.

They produce and release their albums through Square Records.

After so many years of fight, fans are psyched to have them back and ready to pick it up from where they stopped.

Continue Reading
You may also like...
Related Topics:Music, Psquare