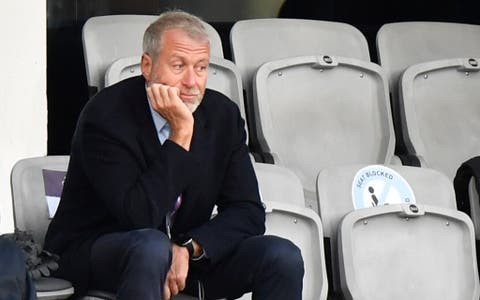 Roman Abramovich has been given 81 days to sell Chelsea, who are in danger of folding up after the United Kingdom government sanctioned the Russian billionaire, Metro UK reports.

The report added that the government also issued Chelsea with a ‘general licence’, which allows the West London club to operate under restrictions which will have a massive impact on many connected with the Blues.

Chelsea have been told that a deal must be agreed upon before the licence runs out on May 31 to guarantee the survival of the Premier League giants as a properly functioning business.

The UK government had on Thursday sanctioned Abramovich, who has owned Chelsea since 2003.

The UK government had on Thursday sanctioned Abramovich, who has owned Chelsea since 2003.

The likes of British property tycoon Nick Candy remain interested in buying Chelsea, but the reigning Champions League holders can now only be sold on the condition that Abramovich agrees to walk away without receiving any financial gain.

Roman Arkadyevich Abramovich is a billionaire Russian oligarch and politician. Abramovich enriched himself in the years following the collapse of the Soviet Union, obtaining Russian state-owned assets at prices far below market value in Russia’s controversial loans-for-shares privatization program.