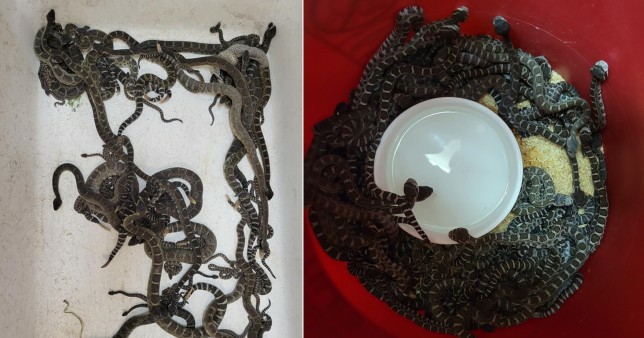 About 90 rattle Snakes have been spotted and taken from a woman’s house in California, aso Naija reports.

The woman who chose to stay unidentified so as not to alarm her neighbors called a reptile rescue team about some reptiles under her house.

The Sonoma County Reptiles Rescue Team alleged that when they visited the woman’s home they came out with 59 babies and 22 adults rattle snakes. The rescue team also said they returned twice and removed 7 more Snakes.

He also revealed that the woman’s house was built around rocks which translates to the fact that Snakes can come and go. He went ahead to state that more reptiles will definitely be visiting the woman’s home.

He said: “The foundation of the home was built around rocks and Snakes can come and go as they please.”

Wolf also said that the snakes were pacific rattle reptiles.

According to the Burke Museum in Seattle, Pacific rattle reptile give birth to 4 to 21 reptile species from August to October. It is also not unusual for female pacific rattlesnakes to gather in one den to reproduce.

rattlesnakes often do not attack humans unless they feel threatened.

Continue Reading
You may also like...
Related Topics:Rattlesnake, Reptile

Don’t Make Mistakes Of Giving Birth To Your Child In Nigeria – Yomi Casual
BabyMama Pero :I Advised Annie To Work On Her Marriage With 2face