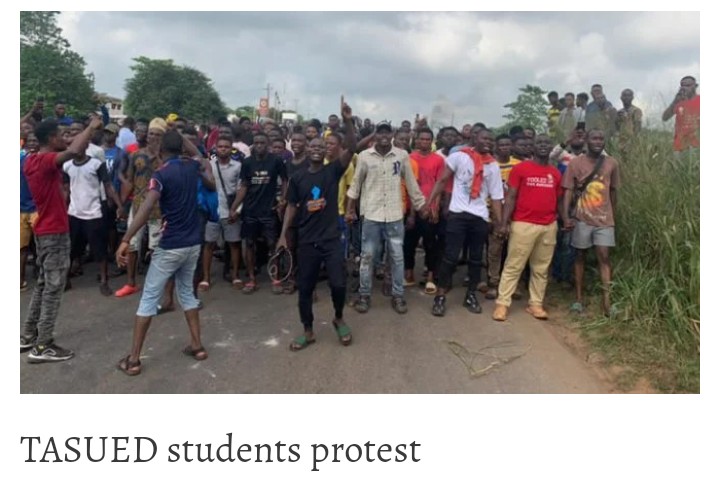 Protest As Soldiers Invades TASUED , Arrest SUG President And Others

Students of TASUED (Tai Solarin University of Education) have protested over the arrest of their colleagues, including the Students’ Union president, aso Naija reports.

During the protest, some soldiers were seen in armoured tanks and Hilux vehicles.

The students chanted anti-oppression songs and dared the soldiers to “kill” them.

Aso Naija gathered that soldiers had on Thursday raided the varsity’s campus Thursday and allegedly arrested some students.

The students’ union in a statement by its Senate President, Moradeyo Johnson, and Chief Judge,
Ayobami Kareem, claimed that some of the students were extorted.

Part of the statement read, “Uniformed men of Nigerian military invaded the students’ community of our dear university and melted absolute injustice, extortion, and assaults on peace-loving students.

“ TASUED students who are going by their legitimate and calm businesses were cornered at CONOIL Filling Station, the Express Road that leads to the University second gate. They were arrested and assaulted for no reason. To make things worst, the soldiers asked students to bail themselves up with N50, 000 and those who could not do that were detained and taken away (most likely to the barrack).

“The Senate President was also severely injured and many comrades were beaten, whipped, and abducted by the military men.

“The Students’ Union abhor this act in its totality, very displeased and frown at the reaction of the custodian of the university to the matter when contacted.

“As of the time of making this statement, the President of the Union is still in the custody of the military men.

“This is a total embarrassment and threat on our university community as a whole, and we will not let it go unchecked.

“Essentially, despite sporadic shootings at the peaceful students at the express and within the University communities, there was no gunshot injuries while we have video proofs of live ammunitions of the scenes. However, scores of students were brutalized and injured, including the Senate President. Meanwhile, the President is still in custody at the Ilese Barracks with other students. And we shall together make effort to release those still in the custody of this disgraceful and embarrassing man of the Nigerian Army.”