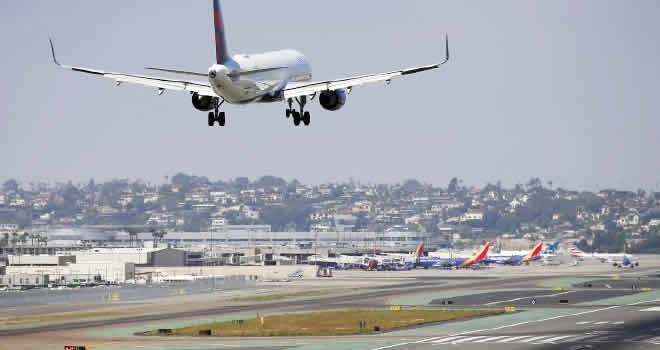 US has cancelled more than 2,600 flights due to bad weather or airline staffing woes sparked by a surge in Covid cases, aso Naija reports

Additional inconveniences are predicted for Monday, as a winter storm blows eastward.

As of 10:00pm (0300 GMT Monday), more than 2,650 domestic flights or international ones starting or finishing in the United States had been canceled — almost as many as the 2,750 scrapped over the course of Saturday, said the flight-tracking service FlightAware.

That figure represented well over half of the nearly 4,400 flights cancelled around the world. Almost 8,600 US flights were delayed.

Southwest Airlines, one of the hardest-hit carriers, had to cancel some 400 flights Sunday morning, a spokesperson said in an email to AFP, adding that it expected further cancellations.

Passenger Nick Kagy was beside himself after his Southwest flight was cancelled.

“ARE YOU KIDDING ME @SouthwestAir,” he wrote on Twitter. “We waited on hold for almost 3 hours to rebook because we couldn’t rebook online, and after getting things (not really fully) resolved, you cancelled our second flight to out of another airport.”

On Saturday, poor weather, much of it linked to Winter Storm Frida, forced Southwest to cancel 490 flights, most of them in the centre-north states south of the Great Lakes and reaching west to the Great Plains.

The result: intense frustration for many travellers.

– Missed connections –
“This is insane,” tweeted Haley, another Southwest passenger who was trying to fly out of Chicago. “This is the 3rd cancellation and still not home. Was supposed to be home 4 days ago!!!”

Airports in Chicago — a major transit hub — were the most affected Saturday, but by Sunday the airports in Atlanta, Denver, Detroit, Houston and Newark were also hard hit.

A woman named Kayla described her own ordeal: “I was supposed to get home at 10:30 yesterday morning. and at this point I’ve had 3 flights cancelled and one delayed to the point where I missed my connection.”

Continue Reading
You may also like...
Related Topics:Airlines, COVID-19, Flights