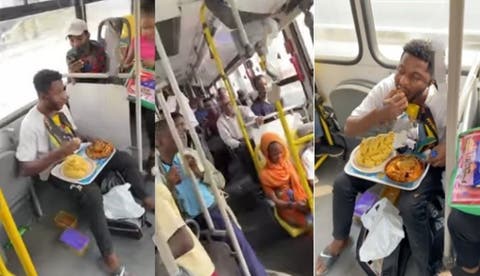 A young nigerian man has amazed a lot of netizens as well as commuters in a commercial bus, aso Naija reports.

The young man boarded a BRT bus in Lagos and decided to treat himself to a sumptuously big meal that consisted of EBA and soup.

He was spotted eating a big mound of eba and soup inside a BRT bus in Lagos. It was learnt that the bus was heading to Sango from Oshodi.

Passengers in the bus could be seen watching the young man with keen interest but the glaring eyes and cameras facing his direction did not deter him from comfortably eating his meal.

Continue Reading
You may also like...
Related Topics:BRT, Viral