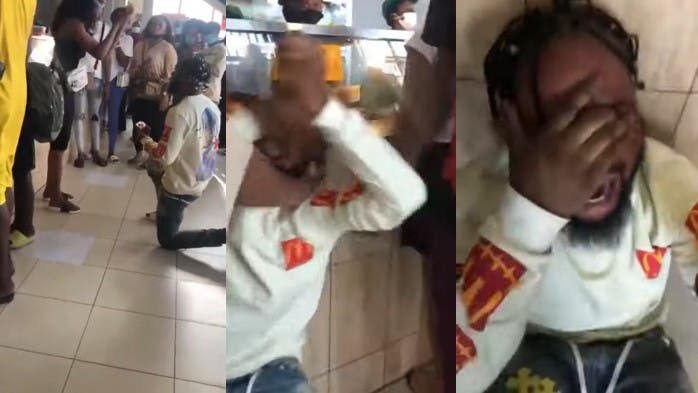 A Nigerian man who wielded his manhood for a fortune ritual to amuse his girlfriend is sobbing painfully after she rescinded his marriage proposal, aso Naija gathered.

He used his manhood for the ritual for his girlfriend, but she rescinded the marriage proposal

READ ALSO: Man Graduate with First Class After Davido Sponsored him to School

In the clip, the man was on his knees pleading with the lady to accept his proposal, but she turned him down firmly.

She could be heard asking if the man could give her a child in a bid to shut people down for trying to make her accept the ring.

After much pleadings fell on deaf ears, people had to interfere in the matter, as they helped him man-up.

The man who spurned to be pacified proceeded to cry painfully until he finally divulged that he traded his Manhood for money in a bid to satisfy the lady and meet her cravings.