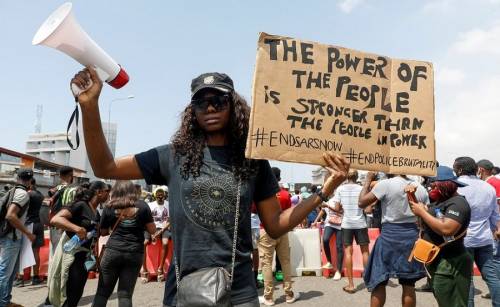 A known society of Youth Rights Campaign (YRC) has planned to embark on a mass protest as the define the White Paper issued by the Lagos State Government on the report of the #EndSARS judicial panel of inquiry as an attempt to wash away the truth, aso Naija reports.

According to the statement issued by Michael Lenin, the National Coordinator and Francis Nwapa, the National Secretary, the group condemned the contents of the White Paper, saying it is aimed at watering down the main recommendations of the panel.

Speaking further, the Youth group said it is undemocratic and illogical that the state government will constitute a secretive bureaucratic committee to randomly pick the panel’s findings and recommendations.

It further stated that the language of the White Paper contains the ‘dubious’ argument deployed by the Minister of Information and Culture, Lai Mohammed and the Minister of State for Labour and Employment, Festus Keyamo, to discredit the panel report.

The Youth also demanded that the white paper on the second report of the panel on the victims of SARS (Special Anti-Robbery Squad) and police brutality in general as well as the maiming and killing of #Endsars protesters outside Lekki must be made public.

The statement reads, “The released white paper attempts to water down and sidestep the main recommendations of the panel, rejects the crucial findings of the panel that a massacre occurred at Lekki tollgate and in many ways tried to neuter the main thrust of the panel report which is meant to ensure justice for victims of the state repression last year. It is to this extent that we consider the white paper an attempt to whitewash of the truth.

“The white paper is a product of a so-called ‘formal committee’ headed by the Attorney General of Lagos State. We think it is not only undemocratic but also an insult to the enormous sacrifices of the judicial panel of inquiry as well as host of witnesses, lawyers, security and medical experts and victims and in extension, many Nigerians who anxiously waited for the panel’s report for over one year for the Lagos State government, whose actions were a subject of the panel’s investigation, to constitute a secretive bureaucratic committee to cherry-pick the panel’s findings and recommendations.

We insist that what the Lagos State government did by setting up a secretive bureaucratic committee headed by the State Attorney General to evaluate the final outcomes of an independent and publicly acknowledged panel of inquiry which held all its proceedings openly, transparently and fairly is illogical and a rape of justice. This is democracy turned on its head. This is what the legendary Fela Anikulapo once called ‘Government Magic’.
“It is not surprising that the language of the white paper is not so different from the dubious argument deployed by the Minister of Information, Lai Mohammed and the Minister of State for Labour, Festus Keyamo, to discredit the panel report. In fact, the arguments canvassed in the white paper to discredit the key panel findings are borrowed straight from the ‘misinformation playbook’ of Lai Mohammed who called the incident of October 20, 2020 ‘a massacre without bodies’.

Continue Reading
You may also like...
Related Topics:#EndSARS, Lagos Panel