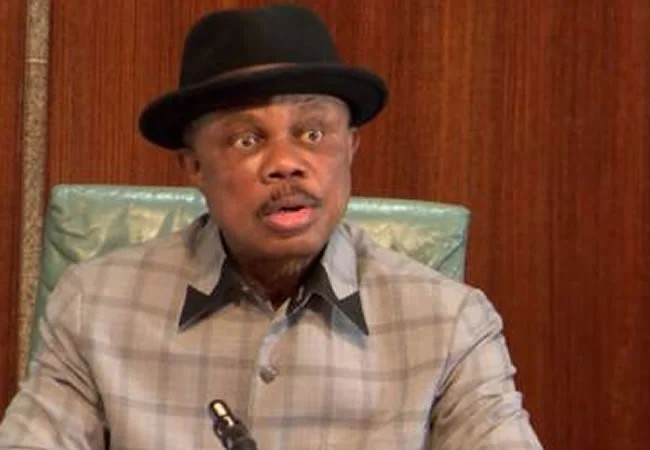 Former Anambra State governor, Willie Obiano, has been arrested at the Murtala Muhammed International Airport, Lagos by operatives of the EFCC less than 24 hours after handing over the government,aso Naija reports.

Obiano was picked up by EFCC operatives as he prepared to board a flight to Houston, Texas, in the United States.

The Economic and Financial Crimes Commission has confirmed that the immediate-past governor of Anambra State, Willie Obiano, has not been released from detention.

The EFCC Spokesman, Wilson Uwujaren, noted that Obiano was transferred to Abuja on Friday morning.

Obiano was arrested by the EFCC on Thursday night hours after his handover to the new Anambra governor, Chukwuma Soludo.

The EFCC PRO stated that the reports were false and that the ex-governor was still with the commission.

“He’s still with the commission. He was even transferred from Lagos to Abuja this morning,” Uwujaren said.

Uwujaren, however, did not state whether the ex-governor was arrested alongside his wife, Ebelechukwu.

The ex-governor, who had been on the watch list of the EFCC since November 15, 2021, was arrested while trying to board a flight to the United States.

The arrest occurred hours after his wife was reportedly slapped by the widow of the late Chukwuemeka Odumegwu-Ojukwu, Bianca at the inauguration of Soludo as the governor of the state.

It was learnt that Obiano was arrested for allegedly mismanaging over N17bn Paris Club refund and security vote.