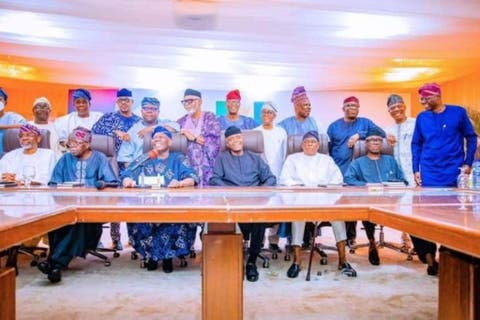 Abike Dabiri Erewa has called out APC South-West leaders for not inviting women to an important meeting on who emerges as the presidential candidate from the region,aso Naija reports.

The APC South West leaders on the 6th of May held a closed-door meeting with leaders of the region.

The leaders present in the meeting comprised the Vice President, Governors in the region, and aspirants.

The ranking leaders are all male, and this didn’t seat well with the Chairman of the Nigerians in Diaspora Commission, Abike Dabiri-Erewa, who called them out for not inviting a woman.

See what she wrote below;

”Hmnnn! Meeting of Apc SouthWest Elders/ leaders.NOT ONE SINGLE WOMAN!From the whole of the SouthWest Dia is God oooooo”

She is a Nigerian politician and former member of the Nigeria Federal House of Representatives representing Ikorodu Constituency in Lagos State.

She was the Chairman of the House Committee on Media & Publicity 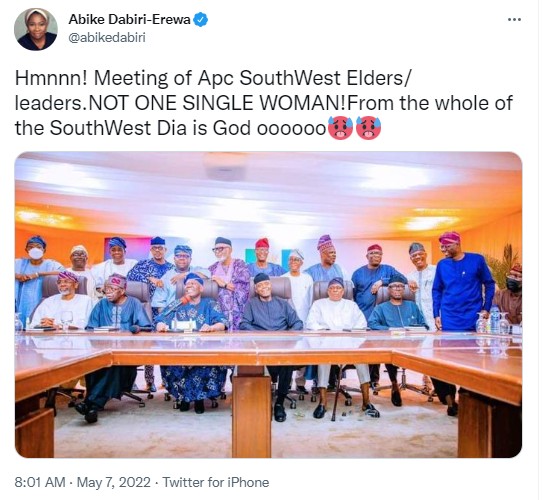 Continue Reading
You may also like...
Related Topics:Abike Dabiri

INEC Removes 124 Parties From 2023 Electoral Participation
“How Can You Allow A Woman To Win Election?” – Twitter User Reacts After A Female Candidate Defeated Nuhu Ribadu, Others To Secure APC Governorship Ticket