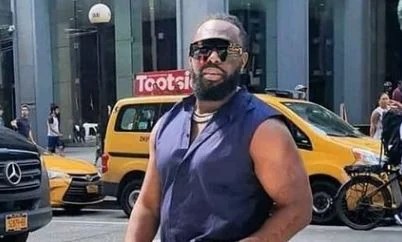 Nigerian singer, Timaya Inetimi, has spoken up amid his alleged arrest and hit and run accusation, aso Naija reports.

On his Twitter page on Thursday, the Dem Mama crooner stated that he didn’t have bad intentions towards anybody.

“Me no get no bad mind for nobody,” Timaya tweeted.

This comes shortly after viral videos emerged on Thursday, showing Timaya being taken away by men in police uniforms.

In another video, the singer was explaining to the policemen while making gestures to the car parked outside the building.

Though the reason for the arrest has not been made known to the public, the videos emerged a day after the singer was accused of hitting a lady in the Lekki area of Lagos State.

An Instagram user, identified as Osinubi Omowunmi, had raised the alarm on Wednesday, stating that the victim involved was her sister.

Omowunmi alleged that  the singer hit her sister’s car and when he was confronted, he also hit her(the sister).

She wrote on her Instagram page, @whyte_26, “These celebrities and how they behave. Timaya nearly killed my sister this morning. He hit her with his car and run at Ikate a few hours ago.

“He hit my sister’s car and she came down to ask him to look at what he did. This heartless human was asking for number and she told him he would block her. Instead of @timayatimaya to do the needful, he hit my sister with his car and ran away.

“She is at the hospital right now in serious pain and the funniest part is that I messaged him on Instagram to do the needful, but this wicked fellow blocked me after reading my message.”

Continue Reading
You may also like...
Related Topics:Arrest, Hit and run accusation, Timaya

James Brown: Davido Blocked Me, I Will Not Attend His Show At O2 Arena
I Won’t Allow My Kids Study Abroad – Yul Edochie