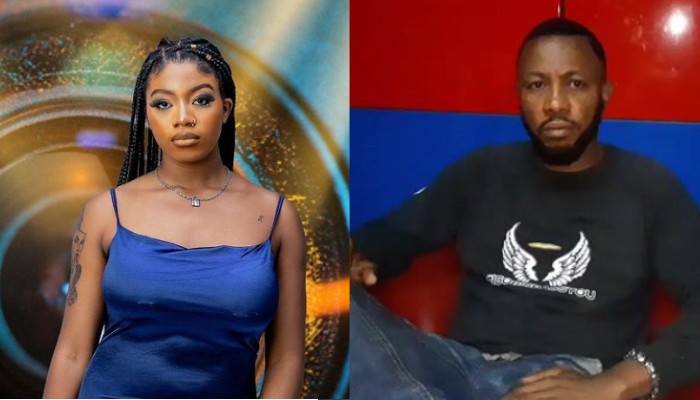 Father to Big Brother Naija Shine Ya Eye housemate, Angel, has reacted to a twist between Pere and Angel to battle as finalists for the show, indicating that it is a threat to his daughter, aso Naija reports.

In a message penned to his daughter on his Instagram page, Angel’s father alleged that they have received fearful threats since the twist was announced.

This happened after Pere and Angel who had faced fake eviction during the live show were pitted against each other for them to continue as finalists on the show.

The duo were isolated in a ‘white room’ in the BBNaija house and had to battle their way back into the show through ‘trucks and screwdrivers’, according to Biggie.

This has provoked reactions from Nollywood actor, Freddie Leonard, as well as Pere’s team, who said they’ve been thrown off balance.

Reacting to the twist in a message to his daughter, @meyagy wrote, “The past 12 hours have been exhausting, emotional and brought a lot of past pains to your loved ones! How much more you?

“All the threats received have created questions and fear of what will happen when you finally leave the show. All your life you have always fought hard for what you want, even when you almost get any, they usually slip away leaving you in pain and self doubt!

“Know that your no. 1 fan, your Dad, has your back irrespective of whatever happens,and the Archangels have you covered.

“As a family, we hope for the best and a result that won’t affect your confidence once more.

“Lastly, we plead with all Archangels to stay strong,at this crucial stage in the game,we are in this together! Thanks for the immense amount of love!”