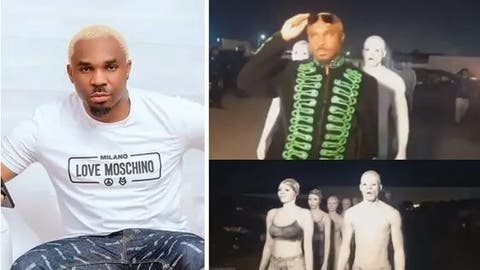 The entertainer is know for making speakable and grand entrances to events.

The beautiful actress however is currently celebrating her 20th anniversary in Nollywood .

pretty Mike showed up in his unusual fashion, and to be honest, nobody expected less.

This time, the socialite  who is known for gracing occasions with pregnant ladies and babymamas, decided to change his pattern.

He was spotted with about 24 individuals who disguised themselves as ‘ghosts’, while barking as dogs and making for the entrance door.

The video has earned Pretty Mike premium dragging from angry Nigerians who feel he is taking his ‘love for clout’ to the extreme.

Eniola was born in Lagos Nigeria she had her basic and secondary school education in Ijebu Ode .

She proceeded to the University of Ibadan where she studied Theatre Arts and then Lagos State University where she graduated with an M.Sc degree in Economics.

Crossdresser Bobrisky To Open His N400m Mansion In January 2022
“Your Money Is For Your Husband, Don’t spend A Dime Without Telling Him ” – Clergywoman Advice Women [Video]