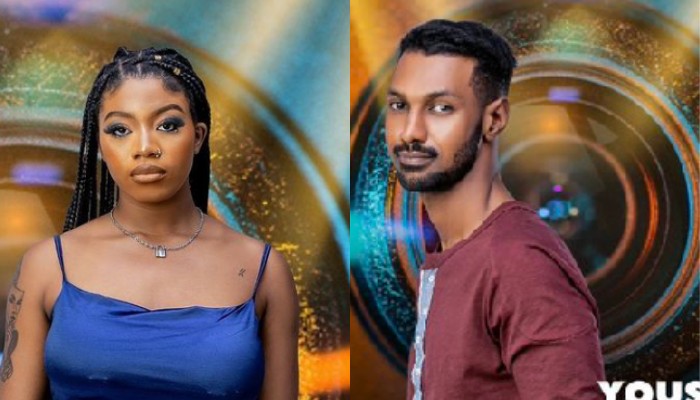 Big Brother Naija Shine Ya Eye housemate, Angel, has been advised by fellow housemates. Though, accused the housemates of ‘spoiling her market’ with Yousef but the Housemate didn’t want angel to break yousef’s heart, aso Naija reports.

She said this while discussing with Pere and Liquorose in the early hours of Saturday, day 49 of the show, after the Jacuzzi Party.

According to her, the housemates were telling Yousef not to fall for her tactics and she doesn’t like it.

She teased, “Why did you guys tell Yousef not to fall for me? I don’t like it. You guys are spoiling my market.”

Liquorose said, “We don’t want premium tears. Angel, please don’t. Not Yousef, you can use Pere. Take Pere with your full chest.”

In response to that, Pere said that he wouldn’t fall for Angel because of Maria.

According to Pere, Maria is the only girl that he has ever loved and he gave reasons why he loved her.

Prior to the discussion, Angel was very clingy to Yousef during the Jacuzzi party and she later made her intentions known to him.

Apparently, Angel wants Yousef to fall for her charm and give her 2000 Abeg naira, the currency used by housemates for their expenses.

She told Yousef to pay up the money and he stated that he would give her in bits.

Angel also told him that if he gives her the money, he’ll become her ‘main nigga’ but if he doesn’t, she’ll find someone else.

BBNaija S6: I Didn’t Have Sex With Boma, We Only Acted A Script -Tega Says
BBNaija S6: I Can Make You Fall For Me If I Want -Angel Tells Pere