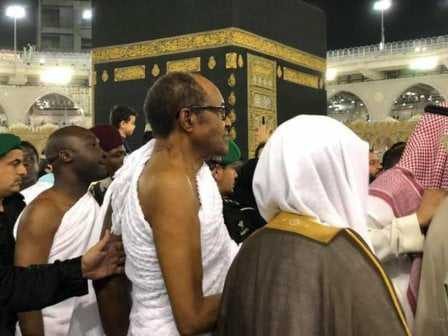 Buhari To Visit Saudi Arabia For Hajj And Proceed To France, Scotland For Medical Examination

President Muhammadu Buhari will on Tuesday leave the country for Saudi Arabia to participate in Umrah, also known as the Lesser Hajj, aso Naija gathered.

The president would from there proceed to France and Scotland where he is expected to begin a fresh round of medical examination.

“ Buhari is going to Saudi Arabia, France and Glasgow from Tuesday. The date is set and part of it is for his medicals.

The trip will not exceed two weeks but the first stop is Saudi Arabia.

He will go for the Umrah before heading for Paris and Glasgow,” one of many sources revealed to reporters.

The publication had in the past reported that Buhari would be visiting Glasgow, Scotland; Paris, France, and Dubai, the United Arab Emirates before the end of 2021.

Buhari to visit Glasgow, Scotland, Paris, France and Dubai, UAE before the end of 2021 amidst strong rumour of third term agenda,” a source had said.

Aso Naija reports that Saudi Arabia, had in August this year, had announced plans to gradually begin receiving Umrah pilgrimage requests from abroad for vaccinated pilgrims starting after about a year and a half of not receiving overseas worshippers due to the COVID-19 pandemic.

The kingdom had announced that with a capacity that would rise to 2 million pilgrims from 60,000 pilgrims per month, Mecca and Medina will start welcoming visitors from abroad to their mosques while maintaining COVID-19 precautionary measures.

Continue Reading
You may also like...
Related Topics:President Muhammadu Buhari