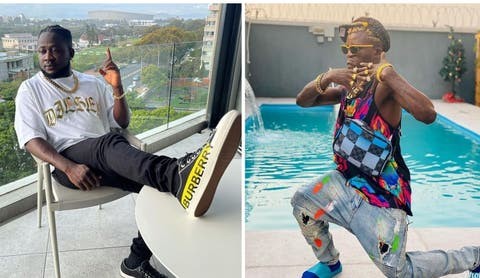 Kogbagidi vs Portable Fight: You Don’t Wrestle With Pig In The Mud – Promoter Blasts Singer

Kogbagidi and fastrising singer Portable has taken their fight to another level.

The Nigerian music promoter, Kogbagidi is currently making heats with singer Portable as he just blasted him on social media by calling him a pig.

This came following the heated exchange between the promoter and the singer, Portable, which would not be the first time they had such.

Taking to Instagram to share a photo of himself, Kogbagidi emphasized being born in the dirt is a stain that may be impossible to wipe off.

“You don’t wrestle with a pig in the mud. You both get dirty but the pig likes it . If you are born in the mud. You are gonna be dirty and people don’t understand that.

Not only do we live among Stars.

Not only do we make Stars.

Stars live within us ✌✌

Continue Reading
You may also like...
Related Topics:Kogbagidi, Portable, Promoter

“I Will Not Go To Hell, I Have MasterCard ” – Mummy G.O
Sperm Theft: Model Claims Singer Drake Put Hot Sauce In His Condom After Having Sex With Her