The picture has been used as a meme for different kinds of conversations and responses. And the taking to the trend, the Nigerian man behind the photo has finally spoken up and claimed he took the picture years ago

The Nigerian man with Twitter handle @EvenTed101 said the funny and now-viral meme was taken by him. He posted two different pictures with the caption “how it started vs how it’s going” 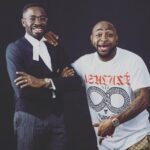