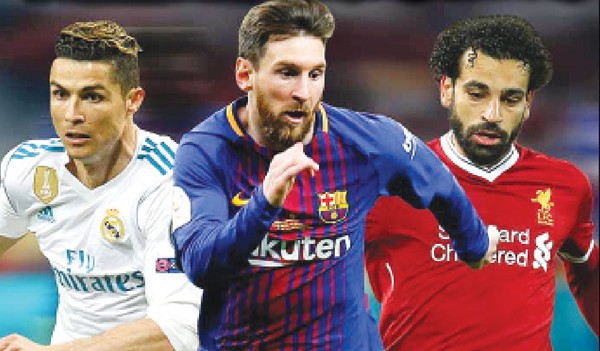 Robert Lewandowski, Lionel Messi and Mohamed Salah were named on Friday as the three finalists for the FIFA Best Men’s Player award.

Poland star Lewandowski won last year’s FIFA award but had to settle for second in the 2021 Ballon d’Or voting behind Messi, winner of the accolade for a record seventh time.

Cristiano Ronaldo was left off the three-man shortlist Friday for FIFA’s best player award for 2021, with Mohamed Salah on it instead.

The awards ceremony will be held virtually from FIFA’s headquarters in Zurich on January 17.

Putellas, Barcelona team-mate Jennifer Hermoso and Chelsea’s Australian striker Sam Kerr are the finalists for the FIFA Best Women’s Player award. The trio were also the top three vote-getters for the Ballon d’Or.

The winner will succeed England’s Lucy Bronze, who took home the previous award.

The prizes for the best men’s and women’s player, coach and goalkeeper are voted for by the captains and coaches of all national teams around the world, as well as an online ballot of fans and a select number of journalists.

Manuel Neuer, Gianluigi Donnarumma and Edouard Mendy are in the running for best men’s goalkeeper honours, while Roberto Mancini, Thomas Tuchel and Pep Guardiola are the three nominees for best men’s coach.

Lluis Cortes, who led Barcelona’s women to a treble last season, is up against Chelsea coach Emma Hayes and Sarina Wiegman, the former Netherlands boss now in charge of England, for top women’s coach.

Continue Reading
You may also like...
Related Topics:Award, Ronaldo