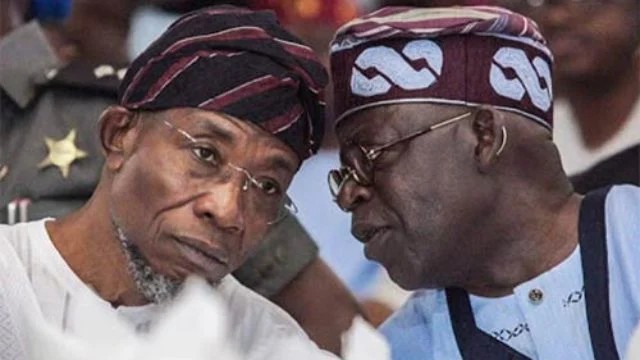 The former governor spoke in the Ijebu Jesa area of Osun State while addressing members of the All Progressives Congress ahead of Saturday’s governorship primary election in the state.

Aregbesola, who was governor of Osun State from 2010 to 2018, declared that enough is enough for the politics of godfatherism and enthronement by treacherous leaders who equated themselves to the status of a god.

The 64-year-old minister said he trusted APC National Leader, Bola Tinubu, but the ex-governor of Lagos State repaid him with betrayal.

Aregbesola accused Tinubu; a former APC interim chairman and ex-governor of Osun State, Bisi Akande, of foisting the current governor of the state, Gboyega Oyetola, on the people, against popular will.

Aregbesola, who leads an APC faction in the state and who had been engaged in a feud with his successor, Oyetola, accused the incumbent governor of not consolidating on his eight-year achievements.

Aregbesola, therefore, called on the party members in Osun to support a former Secretary to the State Government, Moshood Adeoti, in Saturday’s governorship primary.

The aspirants warming up for the party primary include the incumbent governor, Oyetola; former Deputy Speaker of House of Representatives, Yusuff Lasun; and former Secretary to the State Government, Adeoti; who recently returned to the ruling APC in June 2020, from the Action Democratic Party.

He also said just as ex-governor of Lagos State, Akinwunmi Ambode, was rejected by APC members in 2019 for working against the laid down rules, Oyetola would be thrown out of office after just a term.

The minister, who declared that the present administration in the state had deviated from the true tenets of the APC, also accused those at the helms of affairs of jettisoning true democracy and the principles which the party and its heroes stand for.

Aregbesola and Tinubu had been decade-long political associates. The former was Director of the Bola Ahmed Tinubu Campaign Organisation who drove the electoral victory of Bola Tinubu in 1999 and also ensured Tinubu’s return to office in 2003. Aregbesola was also Commissioner of Works and Infrastructure while Tinubu was Lagos governor.