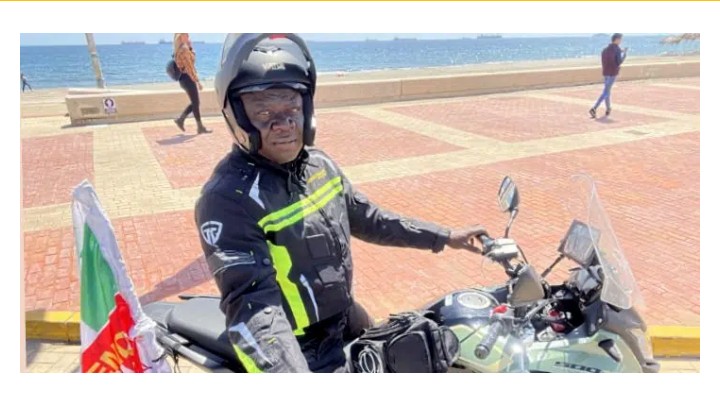 “I want to ride from Lagos to Israel” – Nigerian biker, Kunle Adeyanju prepares for next journey

Nigerian adventurer Kunle Adeyanju is set to embark on another journey with his power bike, aso Naija reports.

This time, his next adventure will be to ride from Lagos to Israel, and from Israel to Tibet.

Adding that he wishes to accomplish the adventure latest by 2024, Adeyanju also disclosed that his destination is Mt Everest.

In an exclusive interview with Arise TV last week Tuesday where he shared his last experience, the biker said he was moved to embark on these journeys after his close friend died of polio.

On his next adventure, Adeyanju said he would like to experience Tibet and Everest which are the highest plane and point respectively in the world.

In his words: “I’m going to buy another bike and do another adventure. My next adventure is going to be riding from Lagos to Israel, just passing through Israel then to Tibet.

“Then, I actually want to ride on Tibetan plane because that is the highest plateau you have in the world. They say God lives in Tibet because of the highest purity. I want to experience that purity.

“My destination is Everest. I’m going to drop my bike at Everest base camp and try to climb Everest. That’s what I’m doing to do with myself in the next two years,” said the adventurer.

Tibet, is on the Tibetan plateau with an average point of 4,830 metres located in the northern side of the Himalayas. It is to the north of India, Nepal, Bhutan and Myanmar. It is nicknamed “Roof of the World.”

Continue Reading
You may also like...
Related Topics:Kunle Adeyanju

“I am not a hater of the church” – Thief leaves note after stealing from church
Davido Begs People To search For boy who scored A1 parallel in his WAEC exams, but has been home since 2021 Because Of Lack Of Money