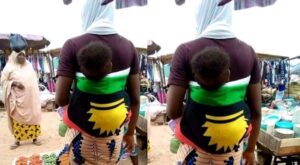 While Nollywood actor Chiwetalu Agu was arrested for wearing a Biafran badge, a woman was discovered in the northern area with a Biafran cloth.

A woman holds her baby with Biafran cloth in a market in Katsina state.

A Twitter user @Ayemojubar shared the image to draw attention to the ‘unjust’ arrest of Chiwetalu Agu considering how people are freely using Biafra outfits.

@RaymondNnamdiO2 wrote; I was telling someone, we produce shoes and all… why not crest them Made in Biafra and ship them out like always… there are so many ways to create awareness. It mustn’t be Protest & sit at home…

@tope_femi; Loud it. Even north dey gbadun am

@SalamaNaziru; She didn’t know what it means sef

@TrillaBen; This is why they said IPOB is sponsoring boko haram