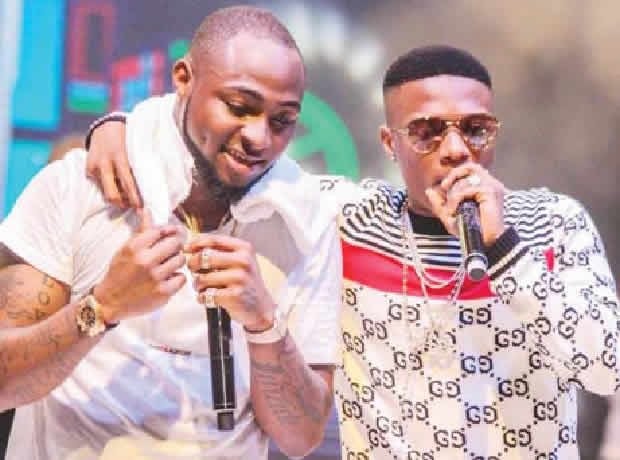 Grammy-award winner, Ayo Balogun, popularly known as Wizkid, and his superstar colleague, David Adeleke, aka Davido has reconciled after a long time fight.

They got fans and music lovers excited as the duo were pictured in a video sharing a warm hug in a Lagos nightclub on Friday night and Saturday morning respectively.

In the video that went viral online, Davido and Wizkid could be seen hugging each other passionately and exchanging pleasantries at the club, as fun lovers in attendance squealed in excitement.

Recall that for many years, both singers had been dogged by claims that they are not on good terms. Meanwhile, in 2018, Wizkid had joined Davido on stage during a show headlined by the latter.

Reacting to the reconciliation, popular singer, Innocent Idibia, aka 2Baba, took to his Instagram page to express his joy. He said, “This puts a smile on my face.”

Rapper, Yusuf Sodiq, aka CDQ, also wrote, “I just woke up now to a video of Wizkid and David hugging each other. Finally, after I had suffered for years trying to balance the relationship between both (of them). Wizkid would say (to me), ‘Your brother is hosting a show, won’t you support him’? Meanwhile, Davido would also tell me, ‘Tell your brother to bring a jam; let us work’. That was when I knew that these two love each other and they have been inspiring each other to go harder. Today I am the happiest person on earth, and I feel like buying cows to throw a big party. Now, both of you should give us that collaboration that the world has been waiting for in 2022. The song arrangement should be four ‘bars’ each for Wizkid and Davido. Burna Boy would then sing the chorus. Let’s make Nigeria number one in the world.”

Jaruma Reacts From Prison, Mocks Ned Nwoko’s (Video)
“Covenant Has Been Made The Moment You Hug Someone, ” – Mummy G.O Says